The Institute of Mathematics and Informatics will commemorate the 90th anniversary of the birth of Prof. Sendov with the following talk by Edward Saff from Vanderbilt University, USA

A talk in commemoration of B. Sendov’s 90th birth date.

This lecture is a part of the Consortium Distinguished Lecture series, organized jointly by the Institute of Mathematical Sciences of the Americas at the University of Miami and the International Center for Mathematical Sciences at IMI-BAS, whose first director was professor Sendov. The event will be held online via Zoom on February 9, 2022, at 6 o’clock PM (EEST, Sofia time). 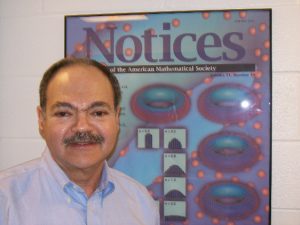 Professor Edward Saff is a distinguished specialist in the theory of approximations, editor-in-chief of Springer’s journal Constructive Approximation and Director of the Center for Constructive Approximations at Vanderbilt University. He has been a foreign member of BAS since 2013. He has a long and productive relationship with Bulgaria and the Institute of Mathematics and Informatics. In 2014, he established the annual Rose and Irving Saff Mathematics Award, awarded to a Bulgarian mathematics student for outstanding achievement and excellence in mathematics.

Prof. Sendov is a world-famous Bulgarian mathematician, a dedicated innovator educator, a prominent statesman and a respected public figure.

Prof. Sendov was the youngest doctor of sciences, the youngest professor and the youngest rector of Sofia University. He was one of the brightest figures in the scientific life of Bulgaria. His scientific work was of great impression with its content, diversity and productivity until the very end of his life. He was the author of over 200 scientific publications, several monographs, numerous textbooks and popular articles. Prof. Sendov was one of the pioneers of informatics in Bulgaria and together with prof. Lyubomir Iliev has a fundamental contribution to its complex development in the country. He was a key figure in the team that created the first Bulgarian digital-electronic computer “Vitosha” and one of the world’s first electronic calculators “Elka 6521”.

Prof. Sendov was a courageous reformer of the educational system at all levels. In 1970, as a Dean of the Faculty of Mathematics at Sofia University, he introduced the three-level form of education (Bachelor, Master and PhD). It was not until twenty-five years later that such an organization of university education was adopted throughout the European Union.